Jackson has been having strange things come out of his drainage bag. This then turned into screaming pain when we accessed his peg or jej.
Today he was in absolute agony and woke up screaming when I tried to give him his morning medicines so he didn’t have them until we found out what the problem was.
The doctors wanted to put dye down the tubes before they x rayed him to see if that came out. And as you can see it does. This is food colouring going direct into his bowel coming out of his drainage bag on his stomach.
This could be his dismotility (when his bowel works backwards) or it could be his jej has misplaced so now we have to wait for x ray tommorow.
He’s not had his Neuro meds I 🙏🙏 he doesn’t get any withdrawals. We used 5ml food colouring 5ml flush. So far we have had 120ml back mixed with yesterday’s medicines 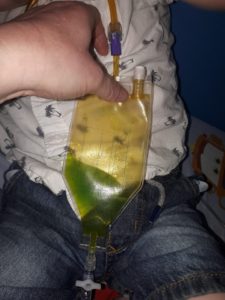 Microbiology have let us know that Jackson has Staph Aureus again

This time it is in his peg site so hopefully its isolated in there. that is getting replaced tomorrow at 3 so fingers crossed it gets rid of it (that and a blast of IV antibiotics)

Jackson did amazing getting his Jej replaced today well done! There is no signs of illness from infection so hopefully we have caught it in time