It has taken me a few days to gather my thoughts so just a warning I might go on a bit.

After 588 days (nearly half his life) in hospital Jackson has been DISHARGED. He has been through absolute hell and back but has done it all with a smile. every day he amazes me with his strength and resilience. he is an absolute legend!! 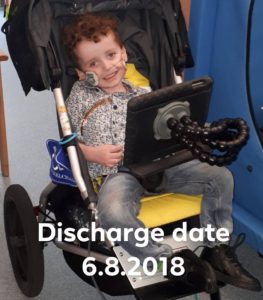 Throughout his journey there has been some very special people who, without them, I don’t think I would be sitting at home today writing this.

THE WARD WARRIORS: Before I had Jackson, I did not know that there are children out there who ‘live’ in hospital. I did not know there was parents who had to split their time between siblings, or parents who did not see their other children because of distance away etc. I did not know that siblings bunked in hospital rooms. But it’s a life, a community that is now part of my life. The children that I have met on the ward are like Jackson – superheroes. They have defied their odds and fought for their place on earth! Kids who have been born so early it’s unreal. Kids who have had transplants or are waiting for transplants. I did not know children received adult organs! So, if you’re not on the donor list sign up now Jackson friends need you!! Their parents have become my extended family. Lifelong friends. Nobody understands the battles I have had on behalf of Jackson like these parents (because they have had similar fights of their own). Everyday chat has been replaced with “jej, peg, PN, type 7 poos, biopsy’s, dysmotility, central lines, short gut, Taz & tike, blended diets etc”.
It might come as a shock but there is NO support for parents of long term inpatients luckily, we had each other xx

FAMILY & FRIENDS: I am so thankful to the family and friends that have took time out of their own lives to come and visit us in hospital. They say that its testing times when you discover who really cares and that is so true. So, a huge THANK YOU you know who you are. To the people that have helped keep Jackson big sister’s life as normal as possible. Leaving hospital 6.30 every day to get her to school has been horrific, but friends have kept her sane. Her dance school principle (& students) has been amazing not only for Erin but for the fund raising and awareness that the studio has done for Jackson.

HOSPITAL STAFF: there is a handful of OUTSTANDING nurses on the gastro ward who without them Jackson would not be here. Jackson main consultants have been with him from day one and they will remain in charge of his care, but for me the true NHS heroes are the staff you never hear about. The domestics who keep us amused every day, the reception staff who help us with parking issues, the café staff for their chats when Jackson has gone to theatre for the …… time. They remember how we have our drinks/sandwiches etc (Jacksons sister thought this was amazing). The shop staff who remember not to get in Jaxs face, but they still talk to him and always have a friendly smile or wave. The health carers for everything they do. Charities like the Rainbow trust and the clown doctors. The list goes on and on and on…

TEAM JAX: when we have been able to get Jackson of the ward we have bumped into a few of his supporters, they have recognised his curls it’s been so nice talking to you. We also read every message you send and appreciate every share you give his page. Jacksons local MP has also been fantastic with continuing to support Jackson on his journey (the good bits & bad).

GREAT ORMOND STREET: what a place, I will never forget the HUGE difference they have made in Jacksons life, they have made it possible for him to come home. We owe that place so much. Jackson STILL does not have a diagnosis, but they have confirmed about his autonomic nervous system. For us this means that people must listen…in the past if we had a doctor who did not know Jackson, come and assess him we were basically fobbed off as “he has no warnings signs” “that’s not what the book says” “that’s impossible” “that makes no sense” etc etc. GOSH have confirmed that Jackson does present differently but it is real! And we are not to be ignored. (his 3-page long emergency care plan confirms this).

Jacksons main care is now with back with his community team (who have been awesome from day 1). He will attend regular clinic at the RVI with the home TPN team, neuro and respiratory. The 100,000-genome project will continue sequencing Jacksons data and who knows one day something might turn up.
We are hoping to start speech and language therapy ASAP as he was responding to it prior to admission but has not been able to access it whilst an inpatient. Communication is a priority as he now communicates by stopping breathing.
Other than that, we just take each day as it comes. Only Jackson will decide what he wants to do we can just help support him as much as we can. xx

We ask that you continue to share Jacksons story and I will continue updating you on what is happening. THANK YOU SO MUCH FOR YOUR SUPPORT xxxxx

PS if you have managed to read all this WELL DONE 😂😂😂