So yesterday, due to a “computer error”, Jackson overdosed and was given a double dose of all his morning medication – this resulted in him being total wiped out (possibly unconscious). 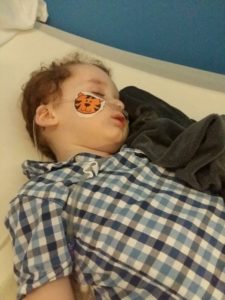 Thankfully his child minder was with him the whole time to make sure he was safe. When Dad returned in the afternoon he demanded a Neuro review. Jax Neuro prof came in to give him an examination, by this time he was responding well. Thankfully (we hope) there was no permanent damage but as Neuro quite rightly pointed out, had Jackson been on the strength of drugs had used to have things would be very very different.
Jackson was very lucky and we are hugely grateful to his child minder and the Neuro team for assessing him.
This has highlighted a HUGE flaw in the system. Very scary!!!!!