Today Jackson has said goodbye to Dad and big sister as they head back up home. Our transfer has been cancelled as they were not ready for us at the other end and Great Ormond Street Hospital would prefer it for him to stay here in case he relapsed. (We totally agree as well). 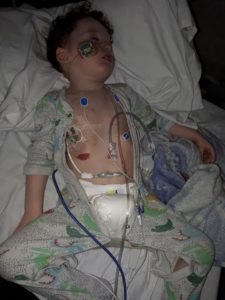 As suspected Jax has deteriorated slightly. He has been tachy all day with his HR sitting between 150-190. He’s had more ECG which just confirmed his sinus arrhythmia again.
Staff here believe this could be because of dehydration. Because his fluid balance the previous day (amd test) should have ran for 24hrs. Jackson only managed 10hrs and because he was due back in theatre they couldn’t replace with PN. So we are on fluid catch up. But I’m pleased to say his HR is now about 100-110 xx